An investigation by Kontant, a feature on Danish national broadcaster, DR, put focus on the massive issues with scam and fake shops in Denmark.

Kontakt talked to two Danes who each had tried to order shoes or sandals on a seemingly genuine webshop, but all they received were suspicious looking products of a different brand and size.

A representative from E-Mærket, a non-profit organisation working to promote safe online shopping in Denmark, says that while most trades and transactions are perfectly fine, there has been an increase in scams recently. E-mærket is contacted on a daily basis by consumers reporting new scams, and they compile a list of suspicious domains which they turn over to the national Fraud Squad on a regular basis.

Based on these lists and other sources, the Fraud Squad has impounded around 700 domains as part of their investigations concerning online scams.

IT consultant Henrik Bjørner has developed a program to constantly track and discover apparently fake webshops. During the last few years, Henrik Bjørner’s program has identified around 1000 suspicious domains. These domains are registered to persons all over the world, but according to Henrik Bjørner this is no guarantee that the person listed as the registrant has anything to do with the domain.

There are signs, however, that a lot of these domains have Chinese connections. The source code on the fake web shops is generally English, but there are frequently short comments in Chinese suggesting an Asian origin.

Henrik Bjørner recommend that a stronger verification method be put in place for .DK domains.

Confronted with the criticism concerning verification of domain registrants, Chairman of the board of DK-Hostmaster, Henrik Udsen, admits that the verification system isn’t balanced anymore and that DK Hostmaster is currently looking into better ways to validate the registrants. This includes a requirement for Danish residents to use their personal eID signature NemID when registering a .dk domain. 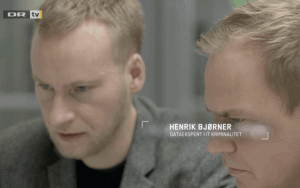